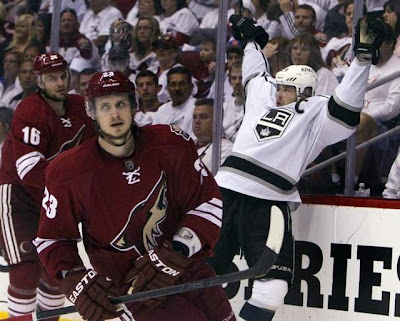 The Phoenix Coyotes were eliminated last night in game five of the Western Conference Finals by the Los Angeles Kings, bringing their season to a close. In a year where they won the first Pacific Division title in team history and made it to the conference finals for the first time in team history, negativity should not be the focus here. Unfortunately, the press during this round generally hasn’t been good for the ‘Yotes, with allegations of Mike Smith diving to draw calls and two players being suspended for hits. There was still a lot to like about their postseason, but they might’ve eliminated some good will with NHL fans after this handshake display:

EDIT — the video is being stubborn and not embedding. For now, go here.

First off, and this has nothing to do with the players, throwing trash on the ice during the handshake line is pretty much a bush league move. I get that fans were ticked about Dustin Brown’s hit on Michael Rozival the shift before Dustin Penner’s game winning overtime goal. In an extremely rare moment of me agreeing with Mike Milbury, Hits that sufficiently late should be penalized. You can be as ticked as you want to be at the officials, but trying to pop them in the head with beer cans during the handshake line makes your team’s fans (i.e. yourselves) look bad.

Secondly, for all of the love shown to Jonathan Quick in the handshake line — and that was deserved, because the guy has had a year for the ages —  there seemed to be a fair amount of dislike going on between the Coyotes and Brown. Yes, they’re upset about the hit, but maybe discuss it later? Now’s not the time for animosity and irritation.

Right after the game when the losing team is still upset probably isn’t the best time for reporters to ask questions regarding questionable calls, either. They’re going to be asked, I know, but you’re still going to catch players at their most irate, disappointed, and generally not happy. Mike Smith was one of those very unhappy campers (via PuckDaddy):

“When Brown gets away with something like that after the whistle — knee on knee, that’s a dangerous play. If Raffi Torres gets 25 games for his hit during the play, this guy should be done forever.”

Ow, forever? Okay then. What else are you thinking right now, Mike?

“It’s not just that play, it’s all game long. They called us for three offsides in the first period and none of them were offside. [A Kings player] flipped it over the glass — how do all four refs not see that? It’s not just this game, it’s all season long. They did everything they could not to let us get to this position.

“I’m not taking anything away from the Kings, they deserved to be here, they played hard and they were a tough opponent. But we battled as hard as we do to get to this point, and seemed like everyone was against us. We battled through adversity through a lot of things that went on. But the officiating … if you’re going to be reffing in the playoffs, it’s tough [with] some of the calls that weren’t made tonight.”

While probably not as bad as John Torterella’s “this game was rigged by the leage to make NBC happy” comments that he was $10K lighter in the pocket for, Smith is still probably going to get fined. The league doesn’t like it when people question the officiating that loudly, let alone when they question their motivation. When you’re accusing the league of telling the refs that they need to go against the team that the league owns, that might be a bit of a stretch.

Smith and the Coyotes are upset, and rightfully so. No one wants to fall short of their ultimate goal. But maybe a little diplomacy might’ve been good here, a la coach Dave Tippet. Let the feelings settle. I have pulled for the Coyotes all season long, because I wanted to see them accomplish something great for their fans, just in case the worst happened. They still accomplished a lot, and while not the Stanley Cup, I’m sure that the Coyotes and their fans will be able to look back on this season with pride. Unfortunately for many fans and members of the media, the way that the season ended might be the defining feature instead.