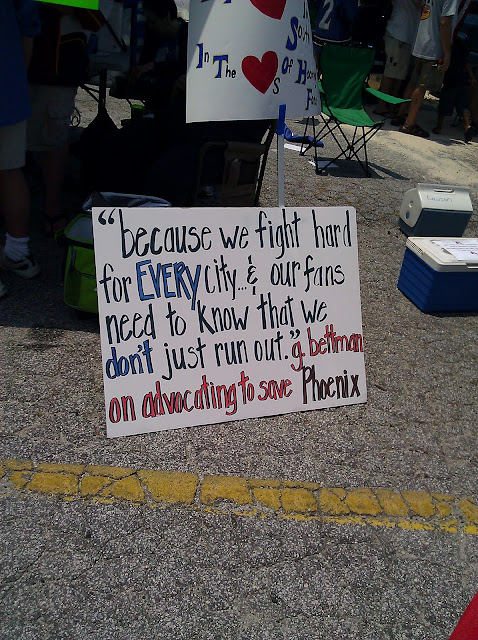 A reminder of the hypocracy of the NHL’s brass; photo taken at the Thrashers tailwake this past May.

Yesterday in an interview with NHL Live that was aired as part of the All-Star game preview show, Bettman got a caller who was a Phoenix Coyotes fan. The fan, understandably, is concerned about the future of his team, and wanted to know what the status was. As hockey fans remember, it was about this time last season that the Atlanta to Winnipeg rumors began, so it would stand to reason that Phoenix fans might be a bit more curious than usual about the future of their team.

Bettman gave the fan an unexpected answer: there’s a third interested party in addition to Chicago businessman Jerry Reinsdorf and a group led by former San Jose Sharks CEO Greg Jamison. Who this mystery third party is wasn’t revealed, but it’s hard to say if hearing there was another group interested was a relief or a source of exasperation for Phoenix fans. The ownership drama surrounding their team has gone on since 2009, when the NHL purchased the club out of bankruptcy. Since then, the NHL’s been both actively shopping the team and somehow getting money from the City of Glendale for losses and the like. At the end of every season, there’s been a threat that they would re-locate, and the re-location of the Thrashers has made it evident that the League will do what they have to do with struggling franchises.

It’s what the league has said that the were going to do with these struggling teams versus what they have done that’s a large source of frustration to not even just Coyotes fans, but fans who have actively followed relocation drama over the past three seasons. You have a league that is doing whatever it takes to keep the team in a market that some think will never be a successful hockey one (despite the attendance for the first several seasons while the team was actually in Phoenix). Obviously, they only have infinite patience, and have another albatross around their neck in the form of the financially troubled New Jersey Devils. The league made it very clear during the Atlanta situation that it won’t own two teams at once; they probably wouldn’t be forced to purchase the Devils but they will probably help out a la the Dallas Stars.

All of this boils down to one huge mixed message: we have a covenant with our fans, but we still run out on markets. We actively work to prop up franchises that are troubled, but only to an extent. We would love to see the Sunbelt experiment succeed, but we’ll take teams away from markets with growing youth hockey numbers. We’ll tolerate low attendance in some cities, but not others.

You absolutely cannot get a read on what the NHL will do at any given moment regarding the Coyotes. While refreshing that Bettman is honest in his interview, you get a sense that he doesn’t really want to come out and say the “R” word. He does say that the future is uncertain, but seems positive that something will get done. That could be hopeful, or it could be nothing at all. After all, here was a person who was saying right up to the sale of the Thrashers that the team wasn’t going anywhere.

Take his words for what they’re worth.