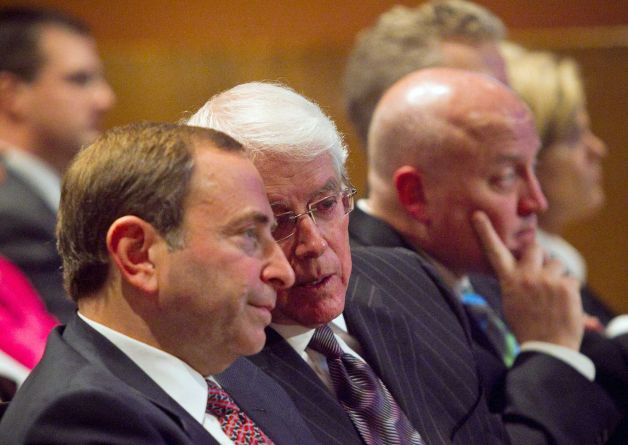 The Phoenix Coyotes' sale has hit yet another rough patch. Prospective owner Greg Jamison, who once was the CEO of the San Jose Sharks and who is the current owner of the Bay Area Seals which he purchased in June. According to recent reports, he might have held off on the purchase of the Seals, as he and his investment group are rumored to be $20 million short of the amount needed to purchase the Coyotes. Jamison and Bettman held a press conference during the playoffs as a kind of "hey, everything's ok!" update, but it looks like they ned to hold another one of those again — and this time it better be true.

The City of Glendale hopped through many hoops to ok the deal, fighting with the Goldwater Group again over legality of matters. They approved a 20-year, $300 million leasing deal which should help Jamison develop and maintain the Jobing.com arena, and of course the best way to do so would be to keep the hockey team in Glendale. This latest news — that he's $20 million short — has been discounted by NHL Deputy Commissioner Bill Daly, as have rumors that Jamison has asked the league to drop the $170 million sale price of the team.

That part might be the sticking point, frankly. The team was purchased out of bankruptcy by the NHL for $140 million, and it's reasonable that they'd like to turn a profit on their investment. However, their investment isn't profitable at this point in time, and Jamison knows it. Whatever prospective members of his ownership group he's courting know it too. The league comes out of this deal smelling like roses, while Jamison and his investors have just purchased a sports team that will take years to turn around. It's no wonder that new investors aren't lining up at the door to jump at this chance.

Coyotes captain Shane Doan has given Jamison until Friday to figure something out. If not, he'll openly start the free agent process and sign elsewhere. He's garnered interests from multiple contenders such as the Philadelphia Flyers and the Pittsburgh Penguins, so it's not like he'd be leaving the only franchise he's ever known to join a team in worse playoff position than the Coyotes are.

One understands Doan's patience and the NHL's, but for a fanbase of a team who've been on the brink of being purchased since December of last year, it's got to be tough. This whole process over the past several seasons has been unfair to the fans in the desert. The indecision and hemming and hawing has been leading along these fans for too long, and they deserve an answer — this team deserves a legitimate buyer.

Doctor by day, blogger by night, Derek Hanson is the founder of the Bloguin Network and has been a Patriots fan for more than 20 years.