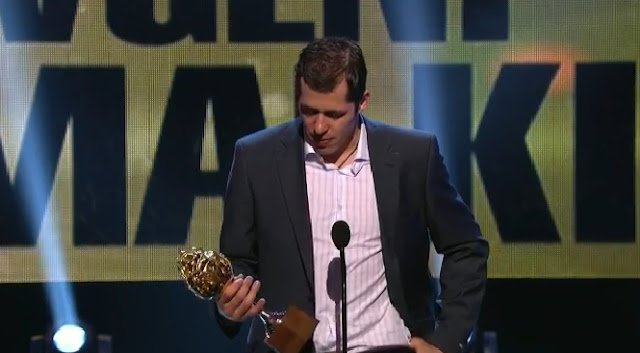 It’s an annual tradition: the NHL Awards are held in Las Vegas, Twitter time lines everywhere explode with sarcasm, and then awards are handed out that no one agrees with. This year, however, the awards were generally spot-in and the sarcasm was left mostly for Nickelback and whoever the poor guy was that wrote the jokes for the presenters.

It is always odd to watch the NHL Awards. As Adrian Dater accurately points out for Sports Illustrated, Vegas is just not an appropriate venue. You have a bunch of people who have been taught since childhood that the crest on the front is more important than the name on the back shoved into the limelight. The thought of getting on-stage and accepting an award is like kryptonite to most of these guys, and then you plunk them down in the party capital of the United States. Watching the footage from the Awards Party the night before the actual awards show, you get a sense of how much most of these guys just don’t belong there (for example, Ken Hitchcock was rocking a flannel shirt). Is it fun to go out and party? Absolutely! Were fans privy to watching them do so as awkwardly as possible? Hell yes!

The audience shots at the show were fantastic. The venue, the atmosphere, the celebrity guests… none of that can erase a room full of guys who are obviously uncomfortable in their suits and who just want to go back to their hotel rooms to change. No one looked comfortable, and the cut-aways to people that the folks on-stage were poking fun at were just as bad. John Torterella did not look amused (of course). Brendan Shanahan looked like he wanted to get up and walk out during Will Arnett’s surprisingly spot-on imitation of him and his player safety suspension videos. No one looked like they wanted to be privy to Matthew Perry’s floundering whatever that was.

So, basically, it was the same as it is every year.

There was very little debate for the award winners, though. If you look at the breakdown of the votes, about the only guy who won that’s open for debate was Erik Karlsson. I fully expected Shea Weber to get his name called, but again the most offensive defenseman won it ahead of two guys who are more known for their blue line skills than their numbers. Other than that, everything seemed to be spot on with minimal fussing.

The acceptance speeches were the picture of humility, especially Evgeny Malkin’s. He, in his halting English that has come such a long way, called last night the best night of his life, and you couldn’t help but believe him. Ken Hitchcock dedicated his Jack Adams Award to friend and fellow coach Wayne Fleming, who is fighting brain cancer. In his moment in the spotlight Hitch, like so many of the other guys up there, thought of others first. Heck, even Henrik Lundqvist’s accidental f-bomb right before thanking his parents was status quo and humble — and hysterical:

Say what you want to about the awards show itself. It is garish, and it is out of place. But the guys that the awards are going to balance the whole thing out.