Jeremy Roenick is not afraid to give his opinion. It doesn’t matter if he has a huge audience or not, chances are fairly good that his mouth is open. Since being hired as an analyst by NBC Sports a few years ago, JR has had a bully pulpit to say, roughly, whatever he feels like. Sometimes this is good, like whenever he and Mike Milbury clash — or when he cries on camera if one of his former teams wins the Cup. 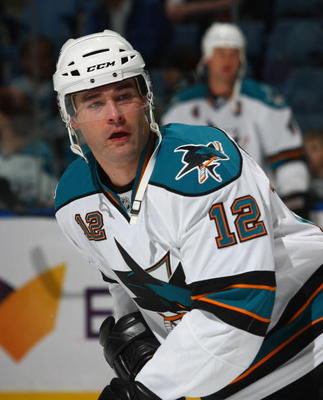 One of his former teams, the San Jose Sharks, are faltering and may not make the playoffs this year. It’s understandable, then, that Roenick might be a bit louder than others when it concerns them. He tends to get riled up whenever one of his old teams does something he disagrees with; witness, then, his dispelasure with the Blackhawks giving Johnny Oduya his old number 27. Granted it wasn’t exactly about the number, but the criticism seemed surprisingly harsh and most folks assumed it was a bit of irritation at not having it retired by Chicago (and yet, it’s retired by the Phoenix Coyotes). You can’t fault Roenick for caring too little about anything, certainly.

JR’s accusing his former San Jose Sharks teammate Patrick Marleau of not caring, however. He’s not “getting mad” because he hasn’t been scoring and, as JR put it on Twitter, has kept the “same facial expression” throughout the whole ordeal. This isn’t the first time he’s jumped on Marleau around the springtime. Last season during the playoffs, JR voiced his displeasure by calling Marleau “gutless” and questioning how much he cared. The year before last he asked during the playoffs “When’s he gonna hit somebody?” and went so far as to call Marleau “disposable.” Did people disagree that Marleau’s play in the playoffs lacked oomph? No, people disagreed with the manner in which Roenick delivered his criticism. Many Bay Area media types called Roenick unprofessional, and it’s difficult to disagree.

Roenick is still frustrated at Marleau, presumably because Marleau has so much ability that isn’t being utilized the way Roenick would utilize it.

You’re not going to get any consistency out of Patrick Marleau because he can’t find it in him to get angry, mad, ticked off enough to help lead this team out of the doldrums.

Right now I’d be scared. I’d be mad. I’d be huffing like a raging bull right now. I’m not sure that Patrick Marleau can do that. I don’t know if he has it in him to bring this team into the playoffs. I’d like to see him get angry, show some passion.

San Jose is the 8th seed by just one point, and does need their big scorers to step up and play. They need their team in general to step up and play. Roenick, however, believes that it’s Marleau’s job to carry the team. As a leader on the Sharks, it does fall to him to a degree. However, he’s not the only leader in the locker room. And he’s also not Jeremy Roenick. JR is very good at saying what he’d be doing in that situation, and he assumes that’s what Marleau needs to do to motivate himself and his team.

The guys over at Fear the Fin are fairly caustic in their assessment of JR’s criticism, and I agree. Marleau hasn’t been totally invisible, but because he doesn’t yell and holler in the locker room he’s not leaing the team. Roenick has to understand that he’s not in that locker room any more, and that he doesn’t know what Marleau is or is not doing. Granted, he played in San Jose with Marleau as his captain. Again, as FTF wonders, does he blame Marleau for ruining his last chance at winning a Stanley Cup?

I’m fairly sure that Marleau is tuning Roenick out, but it’s hard for fans to do so when he’s on the TV fussing and posturing for the cameras. It’s even harder to ignore when he’s doing it at one player’s expense, a player that’s become his whipping boy. Roenick needs to let it go — it’s obviously upsetting to him that he never won the Stanley Cup, and that’s understandable. But there’s been a lot of other really solid clubs that he’s been with that could have won the Cup. Marleau just happens to be one of the last teammates standing who was in a leadership position that Roenick can directly tie into his failure to win. The fact that JR can’t let that slide is more than a bit sad.