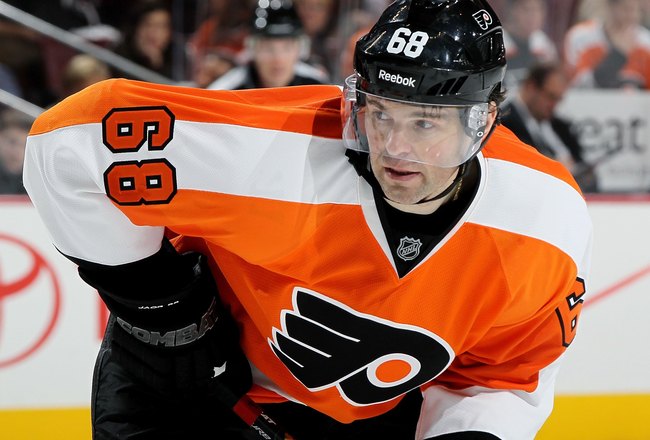 Fans have been asking for months – will Jaromir Jagr play in 2012-13? If so, which club will he skate for?

These questions were all put on the back burner while the Philadelphia Flyers competed in the Stanley Cup playoffs. However, after a disappointing second round exit the questions about Jagr’s future have once again risen to the surface.

A recent article from Philly.com reports that Jagr might be preparing to test the open market over the summer. The article mentions that Jagr has had numerous chances to declare his intentions about whether he he wants to remain in Philadelphia but he hasn’t elected to do so. The belief is that if he wanted to come back to the Flyers he would have said so, making it seem likely that he will at least test the waters of free agency.

As for Jagr playing in 2012-13, that seems like a certainty. He proved in 2011-12 that he not only can stay healthy but he can still be a productive forward in the NHL. If a team, or teams, come knocking asking for his services it seems pretty doubtful he’d say no. The question that remains is whether he will ultimately decide to stay in Philadelphia or try a new location.

Keep in mind that this is mostly speculation based off what Jagr has NOT said as opposed to what he HAS said. Still, speculation or not, it does seem like Jagr has dodged the question when it comes to his future involving the Flyers.

If Jagr does decide to try out being a free agent you can bet that there will be plenty of interest. In 2011-12, Jagr scored 19 goals while adding 35 assists for a total 54 points. These aren’t overwhelming totals but they are impressive ones considering Jagr was 40 at the conclusion of the 2011-12 season. Clearly, Jagr still has some spark left that will draw the interest of teams around the league.

Last season Jagr made $3.3 million in his return to the NHL. A significant raise probably isn’t in Jagr’s future but he could probably get an increase based purely on having multiple teams interested in him. One could make the argument that the “big name appeal” that Jagr carries might be worth making an offer for, especially for teams needing veteran experience.

For now, we wait. Jagr’s hesitation to decide his future is understanable given the ticking clock on his career. You really can’t blame a player in Jagr’s position for wanting to see all of his options now that he’s in the twilight of his career. When all is said and done, Jagr may remain with the Flyers and sport the orange in 2012-13. He just wants to gauge all of his options first.