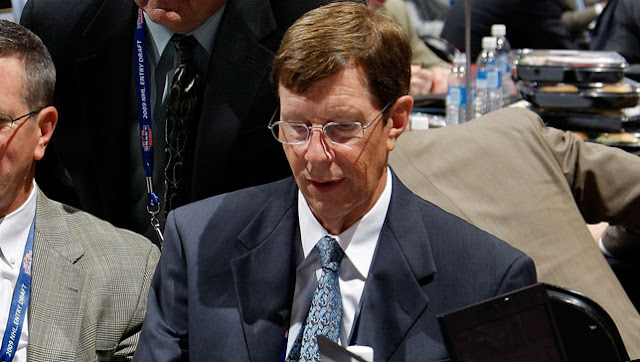 Heading up to Wednesday’s offer-sheet matching deadline, hockey pundits from TSN to some guy in his mom’s basement were all crying the same thing: “David Poile has no choice! He must match the Flyers’ offer sheet to Shea Weber! The Predators can’t lose both of their top defensemen in one off-season!”

It was a gimmie. A “no duh” signing, if you will. A “you let him go and your franchise is toast” kind of move. Now, apparently, it’s shrewdness. As Ryan Kennedy of The Hockey News writes:

In matching the 14-year, $110-million offer sheet signed by captain Shea Weber, Poile wrested his top remaining defenseman away from the big-market Philadelphia Flyers and (with the help of his ownership group’s pocketbook) said not on my watch.

With Ryan Suter already gone to Minnesota for big bucks, it was obvious the vultures were circling Nashville and the GM stood his ground. He’s David Poile, Vampire Hunter.

While that is an outstanding mental image to have, I’m not sure that Poile is that bad ass. Think about it: you’re the GM of a mid-market team who has had pretty darn good success for several seasons after that weird “we’ve been bought by a felon?” scare. You want to maintain success in the South. You’d probably like to tell those naysayers who still mistakenly believe that Nashville isn’t a hockey market to go jump off a bridge. Most importantly, though, you would love to continue to contend because contending makes money.

It’s hard to inspire confidence in your fans when you lose both of your best defensemen — two of the best in the league — in one off-season. Poile knows that. Poile also knows, I’m sure, that losing your team’s captain in a situation like this is a huge blow to confidence both for the team and for their fans. Poile had no choice.

So, while it might look like he’s the hockey version of Shaft, he’s not that bad of a motha… no, I know. Shut my mouth. But still. He might’ve shown that the Preds can hang with the big boys in the NHL, and to make money you have to spend it. Boy, did the Preds ever do that. But Poile’s hand was forced here. Any good GM in his position probably would have matched the offer and dealt with the concequences in terms of payroll later on, and Poile’s not just any good GM. He’s one of the best — so what else was he going to do?