Gary Bettman might be the most hated man in all of sports. As the league continues its third lockout under Bettman's rule, fans and players alike have voiced their displeasure in how Bettman decides to run the league. His tactic of shutting the doors on the league is certainly a controversial one, but is it a smart and calculated one?

A recent article from The Globe and Mail got us thinking – Is Gary Bettman a brilliant commissioner or an incompetent one, drunk on power?

In order to correctly read this article you'll need to remove your personal hatred for Bettman. Yes, he is the face behind the lockout that's depriving you of the great game of hockey, but try to forget that fact for a few minutes.

It's not easy to write about how smart a guy is when the guy in question has burned a fan base as often as Gary Bettman has. Still, there are plenty of facts out there to support that Bettman is incredibly intelligent and knows exactly what he is doing, whether you like it or not.

Consider the fact that Bettman introduced a rule that would require 3/4ths of the owners to vote to fire him. It takes more than a majority of owners to remove Bettman from his seat. Once in power, Bettman ensured he would stay there. Consider the fact that Bettman also introduced a rule that stated he needed just eight votes from owners to reject a CBA proposal from the players, ensuring that rogue views or opinions that don't line up with the general mentality won't sink the ship. This tactic is potentially Bettman's smartest move as it guarantees the game is played by his, and his followers, mindset.

Bettman rules with an iron fist. Consider the quotes in the mentioned Globe and Mail article that refers to the NHL Governors' Meetings as three-hour lecture from Bettman, complete with PowerPoint. You can safely toss the visual of a meeting where everyone exchanges ideas out the window.

Despite these meetings making it appear Bettman doesn't care what the owners think, he apparently goes to great lengths to make sure all of his owners are happy. He reportedly finds out what his owners want and strives to make it happen. This might be part of the reason why you have yet to hear one of the NHL owners speak out against the lockout. His way of ruling has kept most happy – we assume – and has kept the others silent for fear of speaking out.

Bettman is calculated. You won't find many out there that think the man is underprepared or hasn't read in to each and every possible scenario when it comes to a decision. Bettman is critical. He wants the best and expects the best from everyone around him.

In business terms, Bettman is a huge asset for the owners to have.

You've read the argument above on why Bettman is one smart mind. However, it's easy to make an argument that his calculated ways are causing more harm than good. 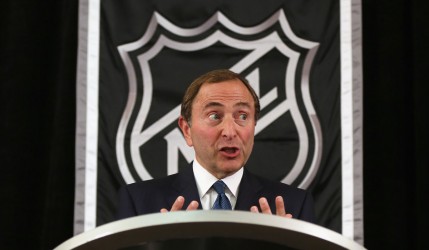 Is it really fair that it only takes eight owners to reject a CBA proposal? It would appear likely that though Bettman tries to go out and make his owners happy, when it comes to a lockout and a CBA he cares more about the needs of the few than the needs of the many. It's possible that 20 owners might all be on board for a new agreement, yet the agreement would fail because of a select few. Sounds foolish to let a small group have such power over the majority. It's a smart move by a dictator but a foolish one in the fact it might hurt the greater good of the sport.

Despite what the reports have said, it's clear that some owners just simply don't buy into what Bettman is selling. Consider the league's stance prior to the lockout about how player contracts are outrageous and the salaries are too high. Apparently, all of the owners were on board with this statement. Ironically, in the days leading up to the actual lockout numerous owners signed players to new deals, going directly against the statements of the league. These actions make you wonder just how many owners actually buy what Bettman and his close group are selling.

Bettman's demeanor and attitude is a glaring negative. Bettman seems to enjoy the "Fearless and Infallible Leader" approach which doesn't pass in the modern era. This approach and refusal to admit mistakes has caused players and fans to despise the man. Say what you will about his likability with the owners but his alienation among the players (AKA, the product that his owners rely on) isn't wise. Own up to your mistakes – you've made plenty of them. If you try something that doesn't work, fix it.

This failure to admit mistakes is partially to blame for why the NHL has – and continues to have – issues in the area of "Player Safety and Discipline". Colin Campbell was a disaster as the head of that position – a point no one could argue against – yet he still serves a major role at the right hand of the commissioner. A man that failed so badly in his position should not still be playing such an important role in the NHL. Retired player Brendan Shanahan is also highly respected by Bettman and was appointed to the role at the head of player safety only to have similar results, though you wouldn't know that based on how pleased the league and Bettman were in statements on Shanahan's efforts in 2011-12. The logical move would be to bring in an unbiased third party, a move you likely won't see because it would mean removing power from Bettman's associates and essentially admitting that Bettman's plans didn't work as he had hoped.

It's also a fair point that Bettman often seems to be a bit shortsighted. He seems to fail to take in the long-term effects of his actions despite being reportedly so calculated. We might be dealing in hypothetical situations here, but imagine how big the sport might be if these stoppages weren't a current threat. Remove the current and 2004-05 lockout and you might see hockey as a major player in the world of sports and not the distant trailer in the big four. He might win a higher percentage of revenue sharing for his owners but you have to stop and think that in the long run they might have made more money with a lower percentage and continuous growth that's not impeded by three stoppages.

Finally, the cries that the owners need more money are plain foolish coming from a man with a salary of $8 million. The points that he rallies behind not only during CBA negotiations but also in general are sometimes odd, confusing and frustrating for the fans.

Bettman is a smart, calculating man that comes up empty in every single aspect of public relations. He acts like a man that represents the owners – he does – but he seems to forget that he also represents the good of the league as a whole as well. He would receive exemplary marks in how he handles representing the owners but he should receive a failing grade for how he handles the image of the league and its fans.

After 21 years, Bettman has a lock on not only his job but also on how the league operates. The rules that he introduced have all but ensured that the league will be run by how he and his fellow minds see fit, for better or worse. These are brilliant moves by a brilliant businessman and leader.

That point aside, Bettman fails – big time – in other areas. He's the most hated commissioner in all of sports (Maybe not if you include FIFA). He's also passionately hated by the sport's players, a fact that's becoming more and more known during the current lockout thanks to social media. One has to imagine that though he reportedly goes out of his way to assist the owners, his methods of dealing with things – like say having three work stoppages – will inevitably wear thin. The smaller market owners and the owners with less money than the rest are forced into an extremely difficult position each time there's a lockout. Those owners depend on the game being played more than the rest.

Bettman might win the battles for his owners (most of them) but it seems like he's trying his best to lose the war by continually pushing players and fans away. The sport won't grow without its players and it won't grow without casual fans. The league had an incredible 2011-12 financially. It was a stepping stone to build upon. Instead, the league takes an enormous step back by cancelling regular season games. Those casual fans that checked things out last year are probably already lost. There are plenty of other options to take in while the NHL sputters. It's fair to take a stand for your position, but it's foolish to do so repeatedly in a way that damages the overall product and hurts the potential for growth in the future.

Love him or hate him, Bettman might be the most brilliant idiot in all of sports.