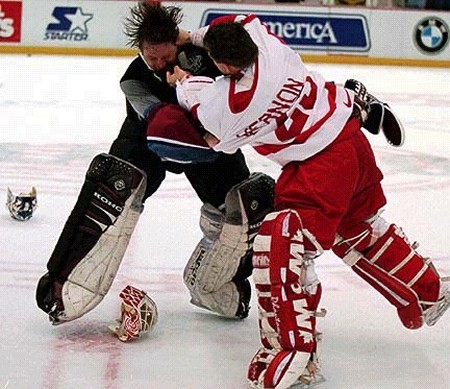 Do people really want this to go the way of the dodo?

The fighting policies in place with USA Hockey are very, very dissimilar to the policies in the NHL. Direct and to the point, they call for removal from the current game and a suspension. Considering that the length of NCAA seasons are just 23 weeks long, a suspension could remove you from a decent bulk of games, making it a powerful deterrent against getting into any fisticuffs at center ice. Do tempers flare? Of course. Do fights still happen? Here and there, but not with much regularity — and this is what Hockey Canada’s looking at in terms of their own rules. USA Hockey is looking at elimination of fighting from all levels of junior hockey under their jurisdiction; Hockey Canada’s trying to figure out how appropriate that is and if it’ll be accepted in the leagues.

Their concern, as voiced by Hockey Canada President Bob Nicholson, is that by removing hockey, you keep the principle of protection out of the game, as well as the other team’s tough guy going after one of your snipers. That’s a very real concern, because if you implement a no-tolerance policy, you’ll have fourth-liners and star players both getting suspended for three or four games for a fight that the star player didn’t want to participate in to begin with. How do you remedy this?

“You might get kicked out of the game after the first fight and get kicked out after the second fight and maybe you’ll get a three-game suspension after a third fight but really, the person you want to punish is the aggressor who starts the fight,” Nicholson said. “You don’t want the toughest guy in the league to go after the most skilled player and kicking both of them out.

Fair enough — not having zero tolerance and applying the policy solely towards the aggressor’s a nice start, but what if the aggressor’s responding to something that the other team’s guy said or did during the course of the game, such as a dirty hit that was missed, or an intentional slash or high stick? Just like suspending kids for fighting in school, there’re some gray areas that are rightfully a concern. You have to be able to read situation by situation, and you have to be able to understand the ramifications of punishments. Nicholson goes on to say something that makes a spot-on argument for leaving fighting in hockey, and has been said by proponents of ditching the instigator rule for years:

“But in [eliminating fighting], we want to make sure we don’t increase other types of violence (such as stick work, head shots, hitting from behind). That’s sort of the tricky point. We want to reduce violence in the game first and foremost. We don’t just want to look at one aspect (fighting). You want to look at all of it as you take on the fighting issue.”

Was that Nicholson making an argument regarding the importance of fighting in the game? It seems like someone has read The Code.

This is where the rules of the junior and collegiate leagues need to influence the NHL. Some are calling for the NHL to limit fighting exactly as the youth leagues are doing it, and some are associating the presence of fighting to the increased level of concussions in the sport. Limiting fighting will do nothing for concussions save for increase their occurrence. What’s the likelihood that guys throw a big hit or one that’s questionable if they know someone on the other team’ll stand up to them versus the likelihood that happens when they know there’s no repercussion?

Eliminating fighting in the junior leagues is fine — most of those guys are either minors or are extremely young and should be focusing on learning the techniques in the sport — but working towards eliminating it at the pro level is opening a whole ‘nother can of worms that probably should be best left untouched.