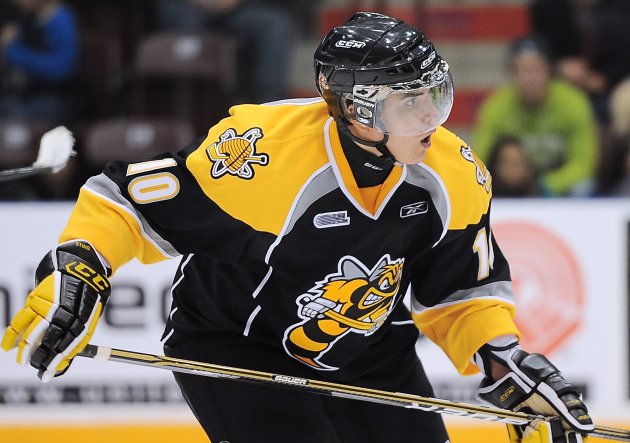 Nail Yakupov, the Edmonton Oilers first round pick (and the first overall pick) in the 2012 NHL Entry Draft impressed sufficiently enough out of prospect camp to have a contract by the end. The Oilers released a press release today stating that Yakupov has been signed to a three-year entry level deal. In case you missed it, the kid’s a bit of a huge offensive threat. He had 69 points in 42 games last year for the Sarnia Sting of the OHL. Despite a disappointing post-season that was caused by a nasty bout of mono, there’s nothing to make one believe that the former OHL Rookie of the Year won’t be able to carry over his offensive touch in the NHL.

From the press release:

Steve Tambellini says, “We’re very happy to sign Nail to a three-year contract. He’s an extremely talented and passionate young man who we feel will be an integral part of our team for many years to come.”

He certainly has internal motivation that has to be confusing the “Russians are lazy!” crowd right now. From an interview with OilersNation.com earlier this month, Yakupov was very emphatic that he wants to make the team to start the season. He worked hard at camp, and he’ll probably make the team to start. No harm in reinforcing that “hard work gives you rewards” mindset early on.