With that, we take a brief look at some of the most prominent story lines heading into the league’s break.

Ovechkin Skips, McDonald Calls Him Out

By now, you’re well aware that Alex Ovechkin has decided to skip this year’s All-Star Game. Ovechkin received a 3-game suspension following a hit on Zbynek Michalek. His suspension, perhaps a debatable one, was met with a rather immature reaction from Ovechkin when he announced he would be skipping the league’s All-Star Game. While this was likely a way of Ovechkin protesting a suspension he deemed unfair and a way of getting back at the league, the only ones slighted by his absence at the All-Star Game are the fans.

Ovechkin brings a star presence to the All-Star festivities – especially the skills competition. To date, Ovechkin’s attempts in the shootout challenge during the skills competition have been the most entertaining as well as the most memorable. Who can forget his silly hat and multiple sticks in an attempt that provided needed amusement.

Ovechkin’s decision to skip the All-Star Game has been met with varying reactions. Some have taken the news in stride, accepting Ovechkin’s decision to skip a contest that really has no incentive to attend. On the other hand, some fans have criticized his handling of his suspension and frowned upon how he has turned his back on an event that is for the fans that ultimately pay his salary and let him do the thing he loves for a living.

Andy McDonald of the St. Louis Blues voiced his opinion via Twitter, stating that Ovechkin “opting” out of the All-Star Game was a classless move. Hard to argue with McDonald though it is a bit surprising that he was the player to come out and say it.

Will the Novelty Wear Off? 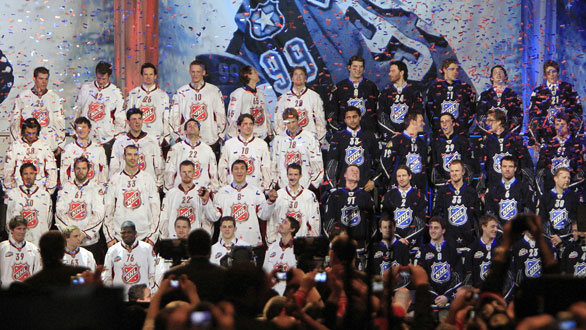 Last year the NHL changed the format of the All-Star Game into a fantasy draft. Two captains select their own roster, mixing the best of the two conferences into two diverse squads. The analysts during the draft loved to predict which player would be selected last and would have the dishonorable privilege of receiving a brand new … car? Yes, that’s what players making millions of dollars need.

That point aside, the draft added an element to the All-Star Game that had gone missing in previous years – interest and intrigue. Would players pick teammates? Would the teams wind up lopsided? All these questions and more led to a couple of days of fun and excitement (well, the most you can have during a meaningless exhibition).

In its second year, will the novelty wear off? We’ve seen the fantasy draft format before so the original aspect of the event is gone. Does this format have enough natural excitement to carry itself in a second year or for years to come? I guess we’ll find out.

Personally, I’ve always favored the classic East vs. West format. I honestly don’t care who wins between Team Alfredsson and Team Chara and I bet most fans feel the same way. Unless you’re an active supporter of Ottawa or Boston I bet you won’t even have an active rooting interest in either of these two players. Under the East vs. West format, all of us had at least something to root for as all of our favorite clubs fall under one of these two conferences. As a fan of the Blues, I want to see Brian Elliott perform well in the All-Star Game, but that doesn’t mean I will suddenly pull hard for either Team Alfredsson or Team Chara. I would however have a significant rooting interest if the West was able to prove that they are indeed the home of the best hockey in the league, much to the disappointment of the national media.

With the novelty all but gone, I wonder how many fans will tune in to the draft now that we have been there, done that. Which bring us to …

The best way to measure whether the fantasy draft has retained interest are the ratings. The NHL has done its best to try to stir up interest amongst the fans heading into the weekend. Will it work?

Fans may turn on the fantasy draft this Thursday to check things out but I wonder just how many would stick around for the duration of the event without flipping around the dial. As a huge hockey fan myself, I’m not even planning on tuning in as I struggled to feign an interest during last year’s draft. I play fantasy hockey – I get how this works. I don’t need an announcer trying to prognosticate ridiculous scenarios for an exhibition game. I digress.

The skills competition on Saturday should draw a larger crowd – that’s to be expected. The events are typically pretty fun to watch though at times the coverage can feel like a bit of a marathon to endure. Perhaps all the NHL players need to take a page out of the KHL’s playbook and try some of the magic in the shootout competition we saw from Vladimir Tarasenko. Pure entertainment.

Then there’s the game itself set to take place on what should be a quiet, uneventful Sunday afternoon. I plan on tuning in more out of not having any other options than from having a genuine interest. To be fair, I’m not a fan of All-Star games in general, which I feel is a pretty commonly shared opinion. Check Puck Drunk Love’s very own Laura Astorian make a great point on why the All-Star Game simply doesn’t matter.

That’s not saying any of us want the exhibition to actually count for something – that’s the last thing I want. Baseball made that mistake and it’s still one of the most ridiculous policies in sports.

Simply put, All-Star Games have lost a lot of interest over the years and it shouldn’t come as a surprise. With the ability to research any player or catch any highlight thanks to the Internet, the days of wanting to see guys you rarely see/hear about are long behind us. Unless you’re an extremely casual or new to the game, you know who most, if not all, of these guys are in the All-Star Game. There’s no need to show them off.

This might be the aspect of the All-Star break that I enjoy the most.

The regular season schedule is a hectic one. You barely have enough time to digest a result before you have to look ahead to the next opponent on the schedule. With some time off in the schedule and each team idle, we can all look around the league and start examining where and how our favorite team can improve prior to the NHL trade deadline on February 27th.

The break gives team management and the front office an opportunity to begin to target where they need to improve and which players they might be able to part with to acquire what they need.

The All-Star break unofficially gets the hot stove cooking – and that’s exciting. Start your rumors!