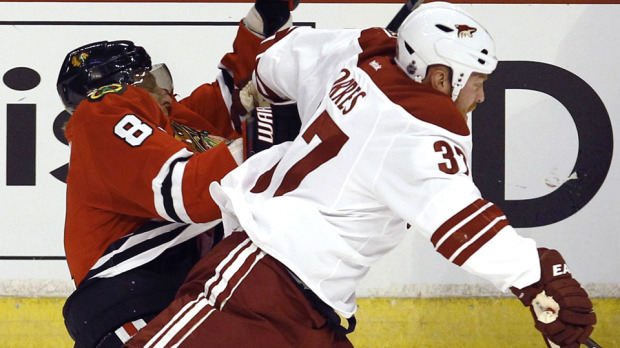 The hit that Raffi Torres put on Marian Hossa during game three of the first round series between the Chicago Blackhawks and Phoenix Coyotes was unprecedented. The hit concussed Hossa and knocked him out for the rest of the Blackhawks’ time in the playoffs. It was high, it was malicious, and Director of Player Safety Brendan Shanahan didn’t tolerate it. Shanahan doled out a 25 game suspension effective for the rest of the playoffs and the 2012-2013 regular season; Torres promptly appealed this suspension. Few thought it had a chance of getting lessened. After all, Torres had a reputation for undisciplined play, and this hit was particularly vicious.

Enter Gary Bettman. In a move obviously not designed to endear himself to Blackhawk fans or the fans in the league who don’t already dislike him, Bettman lessened the suspension to 21 games, overriding Shanahan and upholding the NHLPA appeal.

“This type of on-ice conduct cannot and will not be tolerated in the National Hockey League,” Bettman said in a statement. “We have seen similar behaviour before from Mr. Torres and, particularly given the league’s heightened scrutiny on hits to the head, I believe that a very significant penalty is warranted in this case.

“We hope and expect that the severity of this incident, and the league’s response to it, will help prevent any similar incident from occurring in the future.”

The thing with this line of reasoning is that Bettman shortened a suspension for one of the worst on-ice hits in recent memory. With the spotty penalties doled out during the playoffs, many fans considered this the one that Shanny got right. For the commissioner of the league to override that disciplinarian takes a small chink out of Shanahan’s authority to do his job. It undermines his authority. Dropping four games off of Torres’ suspension was unnecessary, unless it was an olive branch to the NHLPA before CBA talks get heated. If that is in fact the case, Bettman has just added another item to a long checklist of offenses that will make the average hockey fan question his leadership ability.