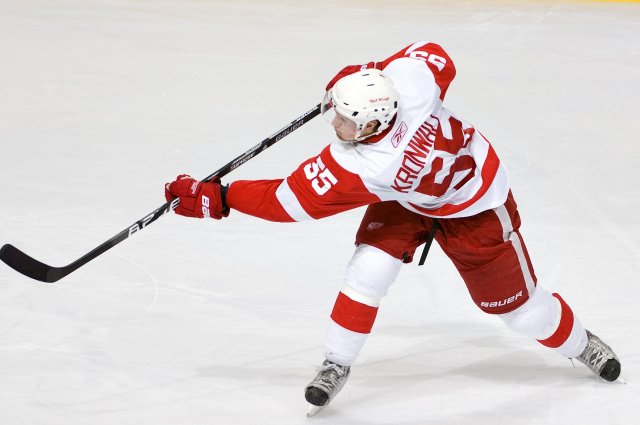 1st Goat: Niklas Kronwall, Detroit Red Wings
Our top spot goes to another questionable hit, this time by Detroit Red Wings defenseman Niklas Kronwall. In the 3rd period of the DET-VAN game, Kronwall skates into the Canucks defensive zone and levels Ryan Kessler. When you watch the hit, you’ll notice that Kronwall jumped right before contact. Luckily for the both of them, the point of contact wasn’t Kessler’s head. A phone call could be in store for Kronwall with Shanahan on line one.

2nd Goat: Dwayne Roloson and Matthieu Garon, Tampa Bay Lightning
This goalie tag team for the Tampa Bay Lightning let in a combined seven goals in their loss to the San Jose Sharks. The Sharks registered 34 shots and had 8 power play opportunities, converting only 2. You know it is going to be a long night when you allow Benn Ferriero to completely come in the blue paint and slam it home – only to have Andrew Desjardins put the Sharks 3rd goal in the same spot on a half wrap around.

Maybe these two should approach Guy Boucher and ask for capable defensemen.

3rd Goat: The Men Who Wear Stripes
The referees never catch a break. For those who watched episode 2 of HBO’s 24/7 Road to the Winter Classic series, you’ll understand why the zebras should be dressed as goats. Questionable calls & non-calls in the MON-PHI game back on December 15th, actually admitting to a bad call, and fitting the mold of “typical Montreal” seals the deal.

Honorable Mention for Goat-like tendencies: The Philadelphia Flyers Training Staff
Philadelphia’s game against the Dallas Stars had a fear written all over it. The team’s top star, Claude Giroux, was in the lineup after suffering a concussion earlier in the month. The Flyers training staff could not have predicted the great outcome from Giroux, but many anticipated the situation could have become worse. One big hit on Giroux could have sent the young forward back on the shelf indefinitely and maybe for the rest of the season. With Pronger already gone, the Flyers danced with fire for the night and survived.

Fights of the Night:
There were zero fights registered during the six games scheduled.

Puck Drunk Love’s Awkward Moment of the Night: Peter Laviolette Meets Steve Ott
Flyers coach Peter Laviolette decided to play by his own rules after the first period when he decided to head to the visiting locker room when Dallas was exiting through the tunnel. Rather than wait, Laviolette just charges in, despite the wishes of Stars forward Steve Ott (#29). A few seconds of awkwardness highlight a 4-1 win for the Flyers. It looked like a perfect time for tea and crumpets, no?