Engelland activated a beacon for the league’s department of player safety after hitting Chicago’s Marcus Kruger into the boards during the first period of play. The hit ended Kruger’s night and caused an immediate retaliation from Blackhawks forward John Scott. While Scott was hit with a misconduct, a fighting major, and an instigator penalty, Engelland only served a fighting major.

Watch the hit below:

After finding themselves down 2-0 late in the first period, the Predators caught a break with having multiple power play opportunities, especially in the second period. The Capitals would basically hand the Predators four minutes of advantage time after getting called for too many men and a delay of game penalty. The night ended with a 4-1 Capitals victory but it could have been a very different outcome.

Before the hockey world called it a night, there was a false rumor sweeping Twitter that stated Maple Leaf forward Colby Armstrong was retiring due to “boneitis”. While it was blatantly obvious that Armstrong had no plans to retire, it didn’t stop the anyone for making it a trending topic while flooding Armstrong’s twitter account with questions. This may not be the last time we see Twitter fans as a goat.

The Puck Drunk Love Awkward Moment of the Night:

During the Leafs Nation Fan Night, fans witnessed the team have a full length practice, a 15-minute 4-on-4 game, and a lengthy shootout. During the shootout portion of the night, not only does forward Colton Orr score by going five hole, but he immediately celebrates by doing his best Tim Tebow impression. 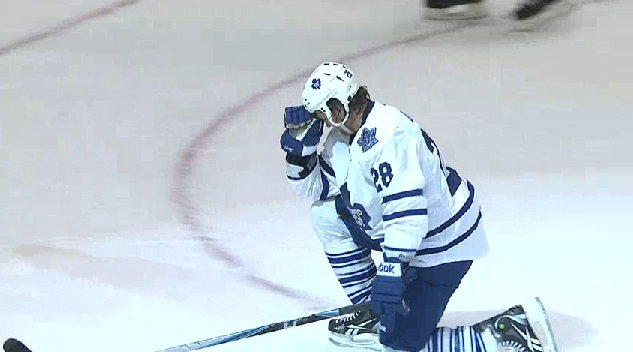