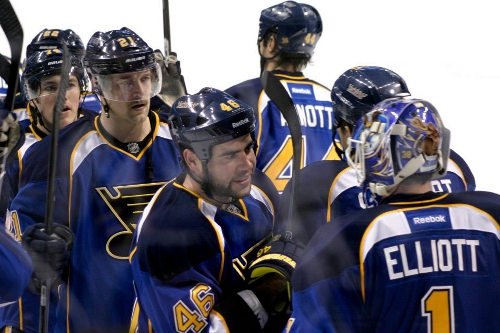 As we make our way toward a new calendar year, every site is releasing their top-10 moments and stories of 2011. While you won’t find that sort of list in this article, you will find my nomination for “Most Surprising Team of 2011-12” to date.

The St. Louis Blues weren’t supposed to do this well, especially not after firing their head coach Davis Payne just 13 games into the 2011-12 season. They surprised everyone by snatching Ken Hitchcock out of the Columbus organization and placing him behind their bench. That one move triggered a series of events that have made the Blues one of the most surprising and most overlooked stories this year.

First, a sidenote. If you’re unfamiliar with who I am as a writer, I’ll inform you that I run a St. Louis Blues blog called Frozen Notes. There I analyze and discuss all things about the St. Louis Blues, which obviously places a level of bias on my head. On the other side, I’m also a hockey fan and a hockey writer and I’ve been forced to put my bias aside on countless occasions as I’ve created NHL content for several sites, including here at Puck Drunk Love. This however is one of those glorious times where passion crosses into work and I can give props to the team I love.

We now return you to your regularly scheduled article.

The St. Louis Blues have been on an incredible run since Ken Hitchcock took over. Seriously. Ever since his arrival, the Blues have been nearly unbeatable, compiling a record of 13-2-4. Brian Elliott has become one of the best goaltenders in the league (more on that later) and suddenly the Blues play with a tenacity and determination that hasn’t been seen in the St. Louis area since the club hoisted the Presidents’ Trophy in the 1999-00 season.

Perhaps most remarkable is the fact the Blues have been able to go on such a run despite featuring an offense that ranks 20th in the NHL prior to the action on December 20th. In addition, the St. Louis power play has been horrific, converting just 11.0% of the time – a number that ranks last in the NHL.

With an offense that’s sputtering and a power play that’s basically nonexistent, how have the Blues risen to become one of the elite teams in the West? 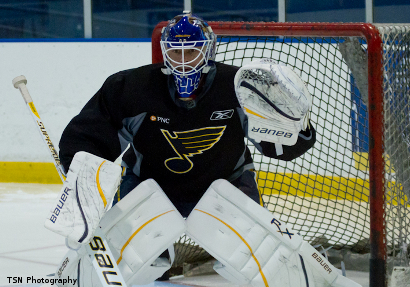 As mentioned above, Brian Elliott (pictured above) is not the Brian Elliott you might remember from his time with the Ottawa Senators and Colorado Avalanche. As of the date of this article, Elliott leads the NHL with a tiny GAA of 1.43. Elliott’s save percentage of .948 is also good for best in the league. Simply unbelievable.

To appreciate Elliott’s quality of work in 2011-12 it’s important to recall where he was prior to the year starting.

The St. Louis Blues signed Elliott to a one-year, two-way contract worth a reported $600,000 over the summer. The team brought him in to compete with fellow netminder Ben Bishop for the backup role behind Jaroslav Halak. It was believed Elliott’s experience might push Bishop, and could assist the team if things got ugly early on with Halak.

No one was expecting anything big from Elliott as his previous stint with Colorado was not only short lived but a disaster. The netminder was dealt to the Avalanche after struggling with the Senators in 2010-11. Upon compiling a 13-19-8 record and a GAA of 3.19, the Senators dealt Elliott to the Avs where things unfortunately got worse. In 12 appearances, Elliott went 2-8-1 with a 3.83 GAA. Elliott entered free agency looking for a contract where he might be able to begin the process of turning his career around. That contract came from the Blues and that revival came quicker, faster and better than anyone predicted.

Now, Elliott is not only the logical number one goaltender in St. Louis but he has quickly become a viable candidate for the Vezina Trophy. At this rate, the lone setback that might cost Elliott the trophy is the time he is splitting with Jaroslav Halak. Since Hitchcock’s arrival, Halak has found a new focus in net that has allowed him to become a much more dependable option than he was when the year first started.

With two dependable goaltender, one of which is having one of the best starts to a season in recent memory, the Blues have been able to limit opponents to an average of 2.03 goals a game – a number that ranks second best (Boston) in the league.

However, the Blues ability to limit an opponent’s offense is due to a cast of characters and not just the men between the pipes, which brings us to the …

The St. Louis defensive unit may be the most underrated in the league. Composed of Barret Jackman, Roman Polak, Alex Pietrangelo, Kevin Shattenkirk, Kris Russel (pictured right) and Carlo Colaiacovo. The unit combines Jackman’s and Colaiacovo’s experience (10 years Jackman, 9 for Colaiacovo) with the young talent in Pietrangelo, Shattenkirk and Russel. The unit also features Roman Polak, one of the strongest defenders in the league that is now playing in his 6th year.

This group of six is a perfect balance of experience, youth, speed and aggression. Jackman and Polak handle the size and muscle, while Russel handles the speed and Pietrangelo, Shattenkirk and Colaiacovo dish quick passes and shots from all over the ice.

Pietrangelo, a player straight from the team’s system, plays with experience well above his years. Skating in just his second full season, you’d never guess it if you’ve ever watched him in action. In his first full year, Pietrangelo tallied 43 points in 79 games and though his pace has slowed in 2011-12, he still has 10 points in 31 games. Pietrangelo’s intelligence and vision on the ice allows him to generate space, generating chances for the team’s offense while nimbly stripping the puck from nearly every forward that comes his way.

Kevin Shattenkirk, one of the most fun names to say on the St. Louis roster, arrived in 2010-11 when the Blues acquired him and Chris Stewart in exchange for Erik Johnson and Jay McClement. To date, Shattenkirk has skated in 103 games and already has notched 60 points – a true testament of the solid shot he has and the ability he has to squeeze timely passes in areas most defenseman wouldn’t be able to.

Finally, the newest piece of the puzzle is Kris Russel, a defender that arrived during the 2011-12 season from Columbus in exchange for Nikita Nikitin. While both teams have benefited from the deal, Russel has proven to be a valuable piece of the puzzle in the team’s push to the top. With speed and timely pinches along the boards, Russel has formed a solid partnership with the fiery Roman Polak forming a perfect combination of solid defense and potent offense.

However, while plenty of credit should be heaved on the St. Louis goaltenders and defenders, none of this would be possible without … 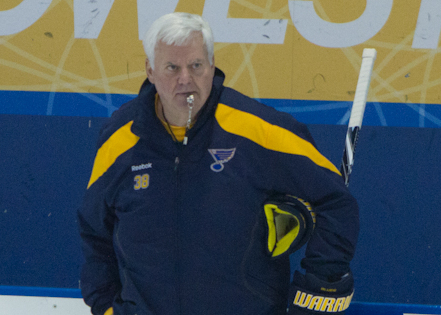 When a club makes a coaching change, they dream of a leader that shapes their band of misfits into a cast of champions. The Blues got that miracle when Hitchcock joined the system and his reformation of the Blues was immediate. Wasting no time, Hitchcock somehow cut out all of the squad’s poor habits they had been practicing in the past couple seasons under Davis Payne.

Loafing on shifts, failing to bring intensity and playing incomplete games. These three traits summed up the majority of the St. Louis 2010-11 season as well as the early stages of 2011-12. The cliche term of “Play a hard 60” rarely applied to the Blues under Payne, as they often came out flat in the first period or disappeared late in games, allowing leads to slip and points to be foolishly given away.

Now, under Hitchcock, the Blues new style is literally a reversal of what we’ve seen from the Blues for the past few years. The Blues dictate the pace of the game, for the entire 60 minutes, forcing the opposition to adopt their style to combat the Blues. Before, the Blues would struggle to exit their own end, let alone be able to set anything up in the offensive zone while resorting to an endless game of dump and chase. Now, the Blues dominate the offensive zone nearly every night, hemming in their opponent while wearing them down with a series of cycles, pinching from the points and massive checks.

The real question that remains is of course, can the Blues maintain this style and pace of play for the remainder of the 2011-12 season? Will the Brian Elliott of old make an appearance or is this new one here to stay?

If this team’s offense starts clicking, the NHL should take serious notice. The Blues have climbed a huge mountain without regular offense and with arguably their biggest weapon, Chris Stewart, failing to make an impact. If Stewart and the offense starts rolling, the playoffs may be more of a certainty in St. Louis than we all think.

While we will have to wait to have those questions answered, a few things are certain. The Blues are a force to watch in the Western Conference and have quickly become a genuine threat to not only make the playoffs in the West but become an elite club in the NHL.