Growing up in Edmonton, hockey was part of my life from a young age. While I was the only one in my class that didn’t lace them up to play minor hockey, as my parents were in favour of less violent alternatives, I was a hockey fan from a young age. Colorado and Florida in the 1996 Stanley Cup Finals did it for me. I was just 8 years old, but watching Vanbiesbrouck and Roy got me hooked.

I would listen to Oilers games on the radio, wondering at times who “La Rock” was, only to find out that it was heavyweight Georges Laraque running down the ice. I remember reading the terribly cliched headlines after Miro Satan got dealt to Buffalo, and eagerly seeking out the Edmonton Journal sports section to find out what happened the night before.

Fast forward a dozen or so years, and I decided that it would be a good idea to head to Ontario for a try at this whole post-secondary thing. This is when I first came into contact with Leaf Nation. I had always watched the Leafs from afar, but as they were halfway respectable during my childhood, it was just a fleeting interest as I waited for the Oilers game to start on Hockey Night in Canada.

My first few year of university were not very memorable, not because I did not enjoy my time, but because few memories remain. But I distinctly remember a classmate coming up to me with a look of pure joy on his face. John Ferguson Jr., the general manager of the Leafs, had been fired. Apparently he was not all that successful as the man in charge or making moves. He handed out no-trade clauses like they were going out of style, and generally seemed over his head in his time atop Leaf Nation.

Then began months of anticipation. Who would be the next man to take the lead? Brian Burke continually denied any interest in the job. Cliff Fletcher was keeping the seat warm, but the elder statesman surely would not lead the team into the promised land. Then to the surprise of no one, Burke was in fact named the new top dog.

All of this news overshadowed the fact that the Leafs were playing pitifully on the ice. None of that mattered as the chosen one was coming to save the team. He was going to flip a switch and somehow make the team littered with horrible contracts and lacking anything resembling a young core into a contender.

For reasons that I will never quite understand, upon graduation I decided to move from a part of southern Ontario that was equal parts Leafs, Canadiens and Sabres territory, into the heart of the beast. The greater Toronto area makes up about a third of Canada’s population, with the vast majority of them rabid Leaf fans. I came to find out that people who were not even born in Leaf Nation could be equally wild in their passion for the blue and white. People moved to the city from all parts of the city under the shroud of finding work, but it was clear that they simply needed to be closer to fellow members of the Nation.

I am now into my second year living amongst the madness, with this year having reached new levels of insanity. I am working at a local sports media outlet, and being in the heart of the beast is indeed a wild sight.

The details of every practice are broken down and discussed adnauseam. The playing status of the seventh defenceman are the topic of endless debate. It truly is madness. Especially with goalies.

Coming into the season, Optimus Reim, or the Reiminister of Defence, was destined to lead the team deep into the playoffs. After a grand total of 37 starts, Reimer was rewarded with a three year/$5.7 million contract. What could possibly go wrong? Well one elbow from Canadiens forward Brian Gionta changed all of that.

First it was “whiplash”. Then “concussion-like-syndromes”. Then he could’t skate for long without having to get off the ice. Then a local scribe decided to place a harmless phone call to his mother to find out what she knew about the mysterious head-related injury.

The way in which the centre of the universe deals with the mysterious injury of their star goaltender is fascinating to say the least. They keep track of the exact number of minutes that he skates during practice. The drills that he takes part in are documented and front page stories are written to delve further into the details.

But what happens when a team, lacking their presumptive star between the pipes, still finds a way to win? Well no one quite sure what to do with themselves. Maybe all of these moves that Burkie made were right after all. The perfect mix of depth, grit, size and skill. The Leafs got off to a roaring start, and even after Reim went down, they found ways to steal a few more wins. But things can unravel just as quickly as they seem to come together.

Injuries are something that are beyond the control of rabid fans and a dozen beat reporters. For the Leafs this year, it seems to come in bunches when it comes to injuries. Connolly came first, then it happened again. The list got out of hand in the past week. Grabovski, Lombardi, Komisarek, MacArthur. But what happens when chunks of the top players for a team with such fans get hurt? They look to the farm. Who is next? Who is the next star?

Nazem Kadri has been the subject of much torture at the hands of the Toronto media. After being taken 7th overall in the 2009 draft, expectations were sky high for the kid from southern Ontario. But he failed to play that two-way type of game that coach Ron Wilson so badly desired from his 18-year old forward fresh off a stint in juniors with the London Globetrotters. 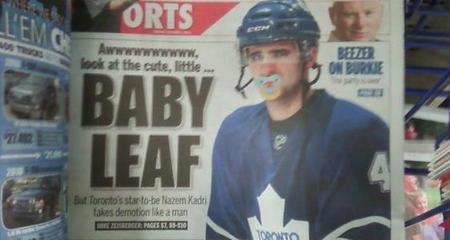 He has been sent up and down between the Leafs and the Marlies like a yo-yo, with the public slowly losing faith in the 21-year old with just 33 games of big time hockey under his belt. They have moved on to the next whipping boy.

Joe Colborne was part of the package that Burke acquired from Boston in return for Kaberle last year. He is a 6-foot-5 centre who plays like he is inches shorter. He went the road less traveled of playing Junior A in Alberta, then a couple years of college before the Bruins signed him to his entry-level deal. He got the call up to the big squad after the Leafs were ravaged by injuries this week, and he will draw into the fourth line for his season debut against the Capitals.

It will be interesting to see how Joe’s time with the big club is handled. If he notches a pair of points in his first game, you be rest assure that he will be promoted to the top-six in a matter of minutes. But if he fails to rack up a point while being winged by some combination of Colton Orr, Jay Rosehill and Joey Crabb. How long will it take for the media and the public to turn on Joe if he does not perform? A week? The trade for Kaberle was seen to be a resounding success. Joe and a 2nd round pick.

Now I sit back and watch in awe as the season that was seen to be a lock for the playoffs just a week ago, now seems to be unravelling. How long until the Leafs faithful start looking at Sarnia Sting sniper Nail Yakupov, and doing some reverse math to figure out how many games they have to lose to solidify their position in the basement of the league?

Living in Leaf Nation as an outsider is a wild experience, but it sure makes for an interesting observation.