Now that we have had some time to let it set in that the NHL as we know it is gone, myself, J.P. Quayle and David Rogers offer our reaction to the most pressing questions.

What team stands to benefit the most from the realignment?
JP – It has to be the Detroit Red Wings. Geographically, they’re in the middle of everything. Travel time for away games will significantly diminish since they will have to visit the East a lot more. Ken Holland will wake up next season thinking that every day is Christmas. It will be a huge relief for the players and the financial books.

LD – It has to be Detroit. They get their wish and are finally out of the conference formerly known as “West”, and they are paired up with teams much closer to them geographically. It really never did make sense that they were in the same anything as Los Angeles and Vancouver to begin with, and they patiently waited until the time was right.

What team stands to suffer the most from the realignment?
JP – The easy answer to this question would be the Vancouver Canucks or Florida Panthers due to geographical location and travel. However, I’m going to go out on a limb and say the team that will suffer the most will be the New York Islanders. Not only will they have to battle the Flyers, Penguins, and Rangers each season but they’ll also duke it out with the Capitals. If they don’t turn the ship in the right direction, they won’t sniff the playoffs for years to come. And I’m not even mentioning the Devils and Hurricanes – who are known to 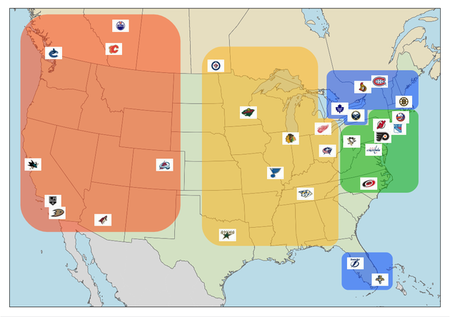 make a deep playoff run every now and again.

LD – The state of Florida. After Detroit got exactly what they wanted, the NHL somehow decided that Florida and Tampa should be lumped in with the teams from the Northeast. While it was ripe for scribes and players alike to make jokes about getting to lie around in the Florida sun, it makes little logical sense for the teams from the sunshine state to not be in the same division as Carolina at least.

DR – Columbus/Winnipeg. Sharing a Conference with Chicago, Detroit, Minnesota, Dallas, St. Louis and Nashville is no easy task. As things sit today, some of the best teams in the entire NHL are jammed into this Conference, and with the top-4 moving to the playoffs, it’ll take something miraculous for the  Blue Jackets or Jets to make it. Aside from these two, Florida/Tampa Bay are thrown into a Conference with teams that aren’t even geographically close. How is Carolina not with the Florida duo?

What new divisional rivalry are you most looking forward to?
JP – I’m expecting big things out of the Toronto-Tampa Bay rivalry. Given that Toronto is the NHL’s most successful city financially, it would only make sense to bring the high-flying (or the upsetting 1-3-1 defensive) Lightning into town time and time again. Can you imagine the possibility of the Markham Ontario native, Steven Stamkos, ending Toronto’s hopes? For some reason I really think this match up will get very ugly and with all the notable names for each club, it’ll make for great ratings.

LD – The league put Washington and Pittsburgh together for one reason. To reignite the rivalry that we were supposed to believe was not manufactured. Ovy and Sid were framed as rivals by the league in their first few seasons in the league, and it might be possible to get it back. If Dale Hunter can get something out of his enigmatic Russians, and Sid can stay healthy, then we could have great days in the new conference.

DR – The new format encourages old rivalries to “rekindle”. Blues/Blackhawks/Detroit will likely be playoff foes regularly moving forward. The league is probably most proud that Washington and Pittsburgh are under one small roof. Same can be said for the New York Rangers, New Jersey Devils and New York Islanders.

Thoughts on the new playoff setup?
JP – The first few rounds will prove to give hockey fans some intense hockey but I still think it is pretty hazy once each team makes it out of their respective division/conference. Will they keep the East-West Stanley Cup breakdown? Will they throw everything out and start over? I would absolutely hate to see a Red Wings – Sharks or a Bruins – Penguins SC Final. It wouldn’t seem right. I sincerely hope they keep things “East vs. West”.

LD – Things could get a little crazy. But it will be nice to see the two best teams, regardless of where they are from, with the chance to play for the Cup. If Pittsburgh and Boston are really the two best teams in the league, then they should have the chance to play each other for the championship. The geography of the teams should not matter, as the league should be most interested in putting the best teams on the ice.

Also, since the top-4 play each other in the first and second rounds (assuming this format is correct), some of the best teams will be eliminated earlier than they would have used to. For example, say Chicago and Detroit finish first and second in their Conference. First seed plays seed four, second plays seed three. If both CHI and DET move on, they take on each other in a “Conference final”, a matchup that likely wouldn’t have been seen until later in the playoffs. Instead, a potential powerhouse goes down early.
Finally, as for the Cup itself, if the NHL plans to reseed the teams once there is a Final Four, things could get messy. Under that logic, two Western or two Eastern teams could battle for the Cup. From a pure ratings point of view, I don’t think the NHL would be too happy if years featured only teams from the West. Besides, a Cup against a face from the same conference, though it’d be rivalry building, but feel different than a Cup against an Eastern opponent you might not be as familiar with.