In a move that was long overdue, the Phoenix Coyotes and Kyle Turris agreed today to a 2-year, $2.8 million deal, as reported by Yahoo! Sports. Turris has been absent so far in 2011-12, sitting out since the start of training camp in the hopes that Phoenix would deal him to a new club after the two sides were unable to come to terms on a new contract. Phoenix refused to meet his demands and instead sat tight, stating if he wanted to play this season it’d be as a member of the Coyotes.

Deadlock over. Turris has signed and the two sides can finally get on with hockey. The question must be asked: was there a winner in this whole dispute, or was it all just a big waste of time?

Without being able to read minds, it’s unclear what Turris was actually after. He’s been with the Phoenix organization since the 2007 NHL Draft where the Coyotes selected him 3rd overall. Upon completing his year with the Wisconsin Badgers, Turris and the Coyotes came to an agreement on an entry-level contract that would last through 2011.

Coming into the 2011-12 season, Turris had appeared in 131 games for the Coyotes and scored 46 points. With his contract expiring, Turris sat as a restricted free agent and when the two side’s couldn’t come to terms, drama unfolded.

Now, there’s a lot of speculation as to what Turris was demanding, but one item that is certain is that he had asked for a trade out of Phoenix. Realistically, Turris wants to play in a hockey market that doesn’t have a cloud of uncertainty continually hanging over the stadium. We’re all aware of the concerns of contraction or relocation in Phoenix, and it’s reasonable to think that played a major part in Turris’ holdout. 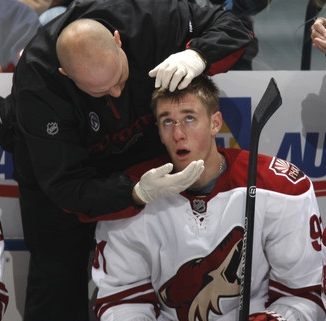 Then there’s the obvious topic of the money itself. Reports differ in what number Turris might have been searching for, but all reports that have surfaced greatly exceed the youngster’s actual value. Rumor stated Turris was after $3-4 million, but it wasn’t clear if that was what he actually wanted or whether that was a demand simply because he wanted to be dealt to a new team. My guess was that the clamor for anything near three or four million a year was just another way to say, “I don’t want to play here, deal me”.

As for Phoenix, it’s fairly clear they walk away the winner here. Had they met Turris and his demands, and dealt the forward away, it’d make the organization look even weaker than it already does (at least off the ice). It’d also set a precedent that no organization wants to have and that’s that they can be bossed around by their players. Instead, Phoenix responded perfectly and called Kyle Turris on his bluff.

Realistically, Turris probably was hunting for a number above the number he ended up receiving ($2.8 million over two years). The fact is, Turris hasn’t done anything at the NHL level to deserve a number higher than the one he just agreed upon. As we are all well aware of, Phoenix isn’t in the position to splash out and pay players above their actual worth, which is why this situation was a crucial one for the Coyotes. By sticking to their guns and signing Turris to a fair deal, the Coyotes maintained authority within their organization and were able to keep a talented forward without breaking the bank.

Which side, if any, do you think won in this whole mess? Or are you, like probably most individuals, glad this whole situation has reached a finale?