To say that being an NHL goaltender is a difficult job is one of the biggest understatements one can make. In the past 20 years 336 men have tackled that job, only 127 of those players passed the 100 game threshold, and 111 of those goaltenders never passed 10 games.

The man who is currently 98th in games played by a goaltender in the past twenty years is Steve Mason.

As a Leafs fan it gives me a perverse pleasure to mock another teams goaltending situation, and the Senators have given me plenty to work with over the years, but after watching Mason get pulled in the middle of the second period last night against the Leafs it has become clear that Columbus may have the most impossible goaltending situation in the league.

Most of us have statistically watched Steve Mason slide over the past few years, but last night was one of those rare times I actually witnessed his suckitude live. Mason is a goaltender playing without confidence. He’s playing way too far back in his net, he’s giving up rebounds, and he’s essentially what the Leafs would look like four years into committing to Jonas Gustavsson as a number one goaltender.

Mason’s story in the NHL began on a very promising note winning the Calder, but as Andrew Raycroft has recently demonstrated, it only buys you a couple more seasons as a starter before you’re lucky to find backup work.

In fact, Raycroft has done well by comparison. That is of course if your comparison is Jim Carey. Carey’s time in the NHL was highlighted by two years of bliss in the beginning, including a Vezina win, followed by a three year downward spiral that would see him out the league in fewer games than Mason has already played. 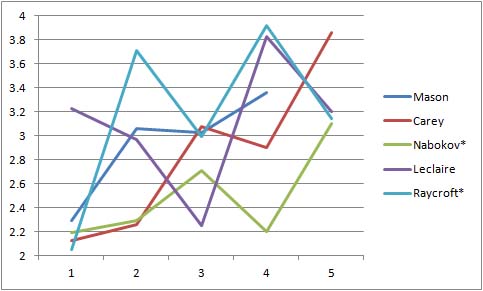 Save Percentage Over First Five Seasons 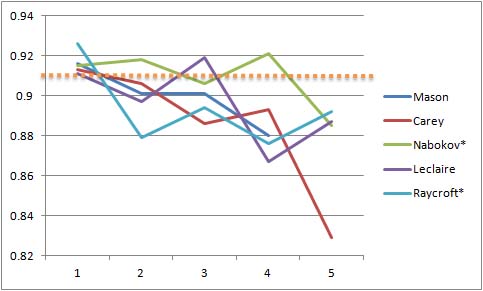 The charts above illustrate the difficult the goaltenders (other than Nabokov) have had sustaining their initial NHL performance. The orange dotted line represents the numbers that a successful number one goaltender would put up in the NHL.

*The Calder winning seasons for Raycroft and Nabokov were used as the first season instead of the first year they made an appearance in the league.

All numbers are from Hockey-Reference.com

Besides Carey and Raycroft, the notable comparable is that goaltender Mason bumped from his starter role. Pascal Leclaire never peaked the way that Mason did, but entered the league with a very respectable save percentage and would peak in his third season before collapsing in the years that would follow. Leclaire’s demise would be more injury driven than purely performance based, but serves to highlight the dangers of handing over starting roles to young goaltenders too early.

Evgeni Nabokov serves as the most recent reminder of what you hope to get out of a Calder winning goaltender, but of course a decade later he finds himself in three goaltender platoon on the bottom feeding Islanders after doing a stint in the KHL to boot. Goaltending is a tough business.

So what are the options for Mason today? You continue to run with him, you can demote him to back-up, you can waive him down to minors (at a risk) or hope that he has some trade value and move him.

The option of running with Mason seems to be the worst one, unless the #FailForNail campaign is in full effect in Columbus. Of course a team that is already losing money at a staggering rate is probably not willing to alienate their remaining fan base even if it means landing the next great NHL talent. As for Mason himself, playing bad hockey on a bad team is likely to crush what little is left of Mason’s confidence and you’ll still need to endure one more year of him, mayhaps in a #FailForEkblad season.

Making Mason a back up seems to make more sense for Mason. He would certainly have more time to work with Ian Clark, the teams new goaltending coach, who was brought in to help the struggling young goaltender. With a chance to hone his craft in practice rather than game scenarios there is a chance for increased confidence from Mason.

The downside to demoting Mason to a backup is the plan only works if a capable number one goaltender or tandem partner can be brought in. Otherwise you risk ruining young Allen York, and no team will be taken seriously trying to use Curtis Sanford as their starter.

An easy number one option could be Marty Turco, if he’s interested in joining a team far from contention, but of course trade options exist as well. Florida will likely be running with Markstrom this season and Jose Theodore or Scott Clemmensen will be available soon enough.

Waiving Mason is a crap shoot at best. He could be claimed, which ridding themselves of a $2.9 million albatross might be just what the Jackets are looking for. If he does successfully land in the AHL, it could be at an even greater cost to his confidence, and there is also the small matter of the issue of a team that is haemorrhaging money not wanting to be on the hook for an expensive minor leaguer.

The upside of course is that Steve Mason finds his game. Much like making Mason the backup, it almost certainly guarantees that an additional goaltender be added for the remainder of the season.

Of course you could always try and trade Mason, but what do you get for 2.9 million dollar struggling goaltender? Recent history dictates that it would be something comparable to Jason Blake, and that doesn’t help a struggling team climb out of the basement.

You could deal him for another struggling goaltender, but even of the struggling goaltenders there is a need for the Blue Jackets to sweeten the pot to have access to them. It is highly likely that Mason cannot be moved unless a contender is struck with a key injury in net.

The Mason situation continues to crescendo; the need for a solution becomes dire in Columbus. In a Columbus Dispatch article discussing the Thursday Night loss to the Leafs, Mason stated: “”Obviously I didn’t do my part tonight.” and inspired the following comments from Leafs coach Ron Wilson, “We scored awful easy… the other kid had a tough night.”

Whatever happens in Columbus it is at least now clear that Mason should at least temporarily be relieved of a starter role and the timeliness in which that occurs will speak to the quality of the Blue Jackets front office. Recently I wrote a post hinting at the notion that poor goaltending played a factor in the demise of the Nordiques franchise, and a similar situation may be playing out in Columbus. To that I ask “Who would you rather blame for your franchises failure, your goaltenders or Doug MacLean?” Personally, I’d rather be able to put 100% of the blame on Doug MacLean.