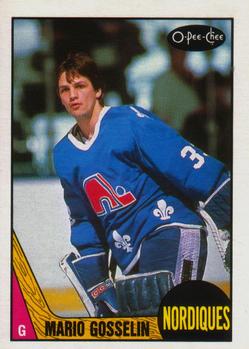 Every Week I’ll be scavenging through my basement and pulling out an old hockey card from a box and writing about that card and that player. This week I purposely went to box that is filled with 87-88 O-Pee-Chee cards.

The 87-88 O-Pee-Chee set was what first got me seriously into collecting. Up until this point I had only a shoebox filled with my cousins old cards they gave me when they had moved to B.C. a couple of years earlier. It was my father that would fuel the growth of my collection by rewarding me with a pack of cards anytime my hockey team won a game, a got a point, or in the event that I was in goal, got a shutout. His big spending ways (the packs were 25 cents) probably made me a better hockey player as well as turned me into a card collector.

The design of the set is great. The front of the card features one of the worst wood grain designs I’ve ever seen. I’d assume it was meant to represent a hockey stick but the dimensions are so far off it misses greatly in this aspect. Most of the pictures taken are from warm-ups and very few cards in the series feature action shots. Despite all of these shortcomings I am very nostalgic for this design, right down to the big black bubble in the corner.

The back of the card is done in different shades of pink for that quintessential 80’s feel. The card also includes all of the NHL/WHA stats for every year the player was in the league, standard profile data, and a worthwhile fact about the player. I’ve always preferred this to the space being filled with a second photo on the back.

The 87-88 was the first set I ever had completed, but that would be short lived. Instead of having a complete set that included the rookie cards of Adam Oates, Luc Robitaille, Ron Hextall, etc. I was dealt a harsh lesson as a seven year old. More isn’t always better.

I was fortunate to have a cousin eager to teach me that lesson, and he played on my love of the Winnipeg Jets by making deals such as Jim Kyte, Randy Carlyle, and Daniel Berthiaume cards for a second year Patrick Roy. I think that’s when I developed trust issues and a more analyzing personality.

The card I wound up selecting out of this classic box of cards was that of Mario Gosselin, then the goaltender for the Quebec Nordiques, former Canadian Olympian (4th place in the 1984 games,) and one time promising prospect.

Mario Gosselin was heading into the 87-88 season as a respected goaltender by 1980’s standards. The previous season he had a goals against average of 3.18 (5th in the league) and mind blowing save percentage of .887 (10th in the league.) According to Hockey-Reference.com we can adjust that Goals Against Average to 2.66 which is relatively more respectable (Perhaps why he is so deserving of this Angelfire Tribute Page.)

Despite coming off an All-Star season where he was amongst the league leaders, Gosselin (nicknamed Goose) remained buried behind Clint Malarchuk on the Nords depth chart. That was however changing in the 1987-88 season as Malarchuk was shipped to Washington and Mario was to take over the number one duties. He would be backed up by another Mario, Mario Brunetta, who I had never heard of before looking it up right now, as well as a third string goaltender by the name of Ron Tugnutt (hehe, Tugnutt.)

It would be Tugnutt that would ultimately dethrone Gosselin as the number one in Quebec and see Gosselin cut loose at the end of the 1989 season, a year that saw his GAA inflate to 4.24. Over time Ron Tugnutt, Stephane Fiset and others would suffer similar fates in net for the Nordiques.

Perhaps it was on the back of Gosselin’s poor goaltending in his final two years in Quebec that the Colorado Avalanche franchise achieved its success. Gosselin’s inability to handle the number one job led to the Nordiques drafting Joe Sakic and Mats Sundin and would spark the rebuild movement that would also see the team draft Owen Nolan, and Eric Lindros first overall.

With similar elements and a solid goaltending tandem the Nordiques were at the very least a playoff team, with Gosselin as the number one they fell rapidly in the standings and wouldn’t recover again in Quebec. Perhaps this is more on Mario Brunetta as an inadequate backup and the Nordiques management for not addressing the issues in net over the final few years of their franchise, but arguably it was poor goaltending, and somewhat poor defense, not lack of offense that drove the Nordiques fan base away and sunk the team.

That’s probably an awful lot to put on a goaltender who was 25 at the time he left Quebec. And he wasn’t so bad that he didn’t immediately find a suitor in the LA Kings. Unfortunately for a team on the up Mario wasn’t a viable backup to Kelly Hrudey, and the Kings would cut him loose at the end of the season in favor of Daniel Berthiaume (a.k.a the Bandit.)

Gosselin would battle in the AHL and IHL for the next couple of seasons before ultimately getting his final chance in the NHL with the Hartford Whalers (presumably Pierre McGuire thought he was a monster.) Gosselin wouldn’t be able to establish himself ahead of Sean Burke or Frank Pietrangelo, and after suffering a knee injury in 1993 he would never play in the NHL again. Gosselin would be retired at 30.

The Gosselin moment that always sticks out to me is during the 84 playoffs he was the only player on the ice not interested in participating in the Good Friday massacre between the Canadiens and the Nordiques. With all of the mayhem going on around him, Gosselin spends the better part of ten minutes calmly sweeping snow from his crease.

I appreciate that when O-Pee-Chee chose a picture to use for Mario Gosselin, they chose to use a picture from a night that he was the backup as it symbolizes what he was best at. Presently Gosselin is back living in Quebec teaching in hockey clinics. In his hometown of Thetford Mines, Quebec they have named the local arena Centre Mario Gosselin. If the story made you have to have the card to go along with it, an 87-88 O-Pee-Chee Mario Gosselin is now available on E-bay for $1.29